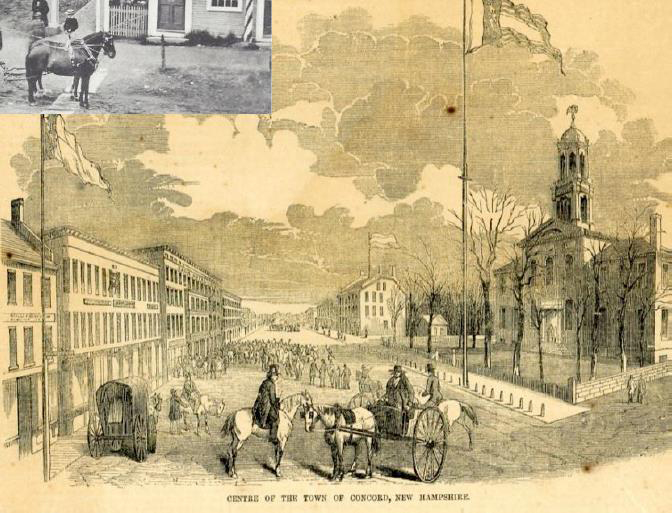 In 2013, completed a Phase I Intensive Archaeological Investigation in front of the State House Plaza, beneath the broad sidewalk along Main Street in Concord, New Hampshire as part of the Concord Downtown Street Improvement Project.  Partially funded by a TIGER grant and the City of Concord, the project focused on improving the streetscape, parking options and sidewalk amenities along Main Street.

A review of historic maps reveals that this open frontage has been maintained since the State House was built in 1819 and has endured through modifications to the building and grounds in the 1860s.  Before the State House was constructed, the home of Captain Peter Robertson (a captain in the War of 1812) stood at the corner of Park Street and Main Street.  Alleged to have been built in 1792, Capt Robertson’s house reportedly stood on the “north-east part” of the two-acre lot and moved in 1816 to make room for the State House.  Remnants of the house or associated deposits may remain beneath the modern surface.  In addition, there is the possibility that intact pre-Contact Native American archaeological resources may be present directly beneath modern concrete.

The Phase IB intensive archaeological investigation resulted in the discovery of elements of the foundation that supported the Peter Robertson House.  Diagnostic artifacts were consistent with an occupation date of ca. 1800 to 1815 but did not shed any light on the construction date of the house, said to range between 1792 and ca. 1810.  These foundation stones were set directly into alluvial deposits and were no more than two courses high, representing the basal elements of the foundation.  It may be that backyard deposits associated with the Captain Peter Robertson House are present beneath the lawn in front of the State House, outside of the boundaries of the project area.

The area was also  evaluated with moderate sensitivity for Pre-Contact archaeological resources, as it is located on a broad floodplain approximately 400 m (1,300 ft) west of the Merrimack River.  Archaeologists recovered one secondary flake of tan, mica-heavy rhyolite from the interface of the sub-base material and an oxidized B horizon, and it may be there was a more extensive Pre-Contact archaeological resource that was stripped away during the construction of the State House plaza.  IAC did not see any thermal features or other evidence of Pre-Contact activity in any of the testholes.