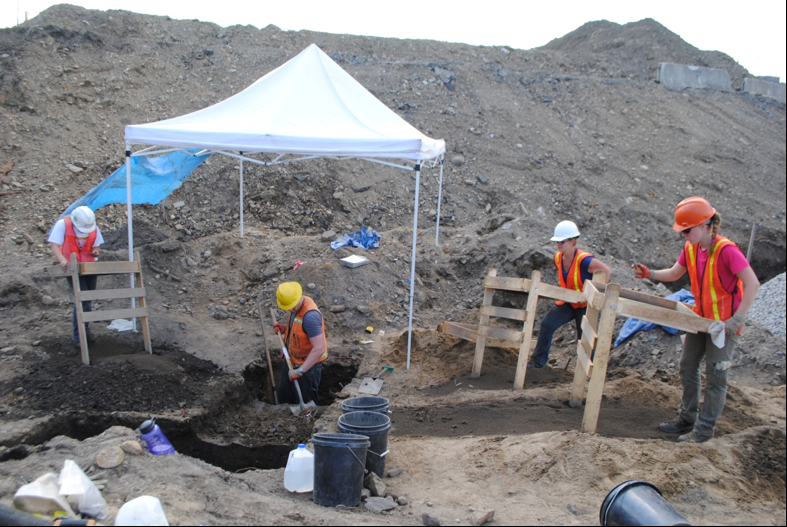 SHOWN ABOVE: Data Recovery of the John Seaward site in progress. In 2012, IAC completed an archaeological sensitivity assessment and data recovery for the New Hampshire side of the Memorial Bridge over the Piscataqua River, and the Scott Avenue Bridge, a land bridge on concrete abutments that rises to meet the Memorial Bridge in Portsmouth.  The studies confirmed that the bridges were established on the old shoreline of the Piscataqua River where wharves and warehouses stood from city’s earliest settlement in the 1600s, through the commercial heyday of the 19th and early 20th century. Researchers also confirmed that the block between Daniel and State Streets at the waterfront was densely developed perhaps as early as the early 1700s.  In 1922, an entire block of houses and industrial structures between Daniel and State Streets was dismantled or removed in order to accommodate the original Memorial Bridge platform.  Based on these findings, IAC and NHDOT developed an Archaeological Monitoring Protocol to be following by Memorial Bridge Replacement Project contractors.

During the construction phase, IAC retrieved a total of 22,287 artifacts from cellar deposits from the John Seaward Homestead, an 18th–century home of one of the earliest merchant mariners at the harbor. The archaeologists also noted a burn layer with charred remains from 1813 fire as well as evidence of original slope and early piers along the waterfront.

Despite disturbances associated with the initial Memorial Bridge construction in 1923, the massive Scott Avenue abutment preserved the eastern half of the John Seaward cellar.  In August 2012, excavations revealed the southern foundation wall (Locus 1) and a filled root cellar (Locus 25) from which IAC recovered 12,683 Euroamerican artifacts.  These artifacts date as early as the mid-18th century and include faunal remains (mostly large cow and pig) exhibiting butchering marks.  Eighteenth-century ceramics include tin-glazed earthenwares, English salt glazed stonewares, redware and creamware.

The parasitological and macrobotanical analysis revealed that the root cellar was an open void, likely in a vacant lot where many weedy plant species, such as Jimsomweed, raspberry/blackberry and ground cherry, thrived.  Although the three dominant identifiable seed species can be used for either medicinal purposes or consumption, the spectrum of seeds recovered are all from taxa commonly established in areas of disturbed soils.

Analysis of the faunal assemblage showed deposits contained a great diversity of marine material including cod, haddock and sculpin.  Also present is a high volume of shellfish, predominantly clams, oysters, and mussels, suggesting that marine resources were a dietary staple despite the availability of domestics (pig, cow, sheep/goat, and chicken).