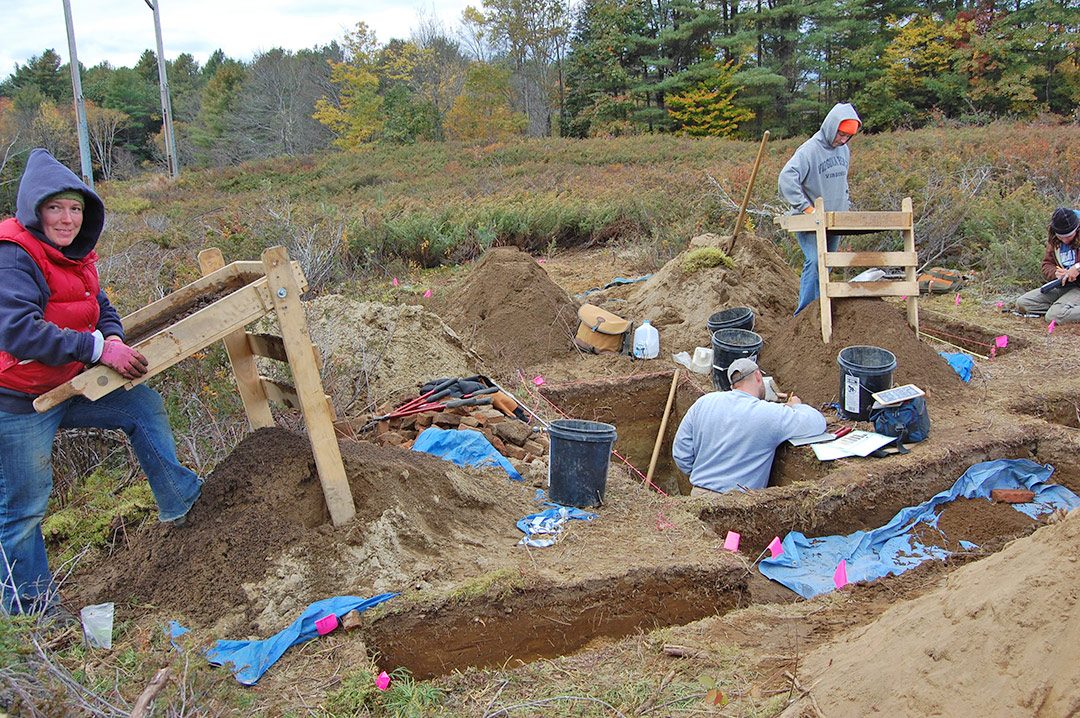 SHOWN ABOVE: Excavation at the Early Homestead site. Excavation at the Early Homestead site.

IAC has served as the cultural resource manager for multi-year, multi-phased Euroamerican (Post-Contact) archaeological investigations along Central Maine Power (CMP) transmission corridors covering 300+ miles in Maine as part of the Maine Power Reliability Program (MPRP). The initial sensitivity assessment in 2008 identified thirty-one (31) Euroamerican archaeological sites along 19 transmission corridor segments from Eliot to Orrington, Maine. These sites included several small-scale industrial sites (eg., blacksmith and a sawmill) as well as many early to mid nineteenth century farm complexes. Twenty-eight (28) of these sites were deemed potentially eligible for the National Register of Historic Places (NRHP) and IAC tested all but five (5) at the Phase II level. IAC recommended sixteen (16) for National Register eligibility under Criteria A, B, and/or D. Added to these were four (4) sites previously identified as awaiting mitigation – for a total of twenty-two (22) sites recommended for mitigation if the sites could not be avoided.

One of the 22 sites of particular interest was one designated Early Homestead in Pownal, Cumberland County, Maine. The Early Homestead consists of a backfilled cellarhole for an earthfast structure and an associated artifact deposit in the immediate vicinity of the cellar. The wooden superstructure apparently burned in the early decades of the nineteenth century, and the backfilled cellar represents a “Pompei moment” of excellent preservation resulting from catastrophic abandonment.

IAC argued, and the Maine Historic Preservation Commission (MHPC) concurred, that the site is eligible for listing in the National Register of Historic Places under Criterion D, as an example of a “creamware-pearlware” frontier site. These “creamware-pearlware” sites are not uncommon in Maine, but are a threatened resource because their discovery is not tied to the usual site prediction model. “Creamware-pearlware” sites refer to those habitations from the late Colonial period (the 1760s) through the end of the first quarter of the nineteenth century, when the English-made creamware and pearlware were the most prevalent refined earthenwares at a site. Occupations at these sites last one generation or two, but by the time of the nineteenth-century mapping efforts, the dwellings had been abandoned and fallen into ruin. Many of these “creamware-pearlware” sites were initially settled by veterans of the Revolutionary War, whose services were repaid with land grants in the new country.