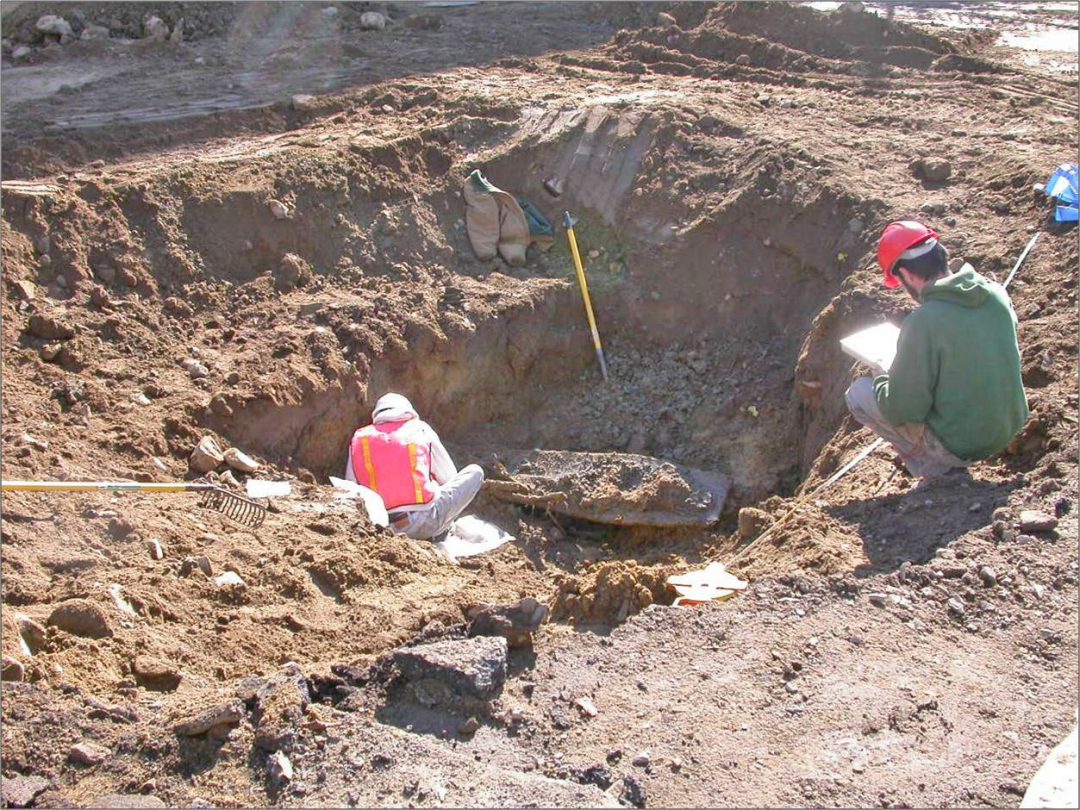 SHOWN ABOVE: Coffin base of Grave 1, encountered October 7, 2003

On the morning of October 7, 2003, while excavating a 6-ft hole for a sewer manhole in the west lane of Chestnut Street in downtown Portsmouth, New Hampshire, the contractor encountered the base of a hexagonal coffin and immediately notified IAC. Already “on-call” and well acquainted with the possibility of encountering the 18th-century “Negro Burying Ground” as it is called in historic documents. Now referred to as the “Portsmouth African Burying Ground,” this segregated burying area for colonial-era African-Americans may have been in use as early as 1705 in what was then the outskirts of town. As Portsmouth expanded during the prosperous 1790s, the burying ground was subsumed into the urban landscape as part of Chestnut Street and Court Street. The last burial is presumed to have occurred about 1800, shortly before the two streets became regular travel lanes.
The archaeologists worked over the course of six working days to recover the skeletal remains of eight individuals from seven burial shafts. Two of the burials were stacked. Five others were identified at the edges of the project impact area but were left undisturbed, bringing the total number of grave shafts to 13. Four of these extended beneath the Chestnut Street sidewalk. Archaeologists also discovered that late 19th-century clay sewer pipe had been installed along a narrow hand-dug ditch running through several of the burials.

Although the wet dense clay preserved the white pine coffin wood fairly well, the osteological material (bone and teeth) inside the coffins was less well preserved. To insure the preservation of remains, IAC removed burials en bloc (i. e., with both wood and bone encased within the surrounding clay matrix) to a laboratory provided by the City of Portsmouth. Over the winter of 2003-2004, IAC lab technicians spent approximately 500 hours in the laboratory extracting the bone and teeth from the clay matrix. During the lab processing, it became clear exactly how fragmentary and fragile the skeletal remains were. Most burials are represented solely by teeth; others by long bones and teeth; and in one instance (Burial 2), the skeleton was nearly complete, except for the cranium –apparently destroyed by the backhoe when excavating the hole for the sewer manhole. In the spring of 2005, a team of forensic anthropologists, led by Dr. Marcella Sorg from the University of Maine – Orono, and Dr. Thomas Crist of Utica College, performed a full examination of the remains in an effort to determine age, sex, stature, health, and possible cause of death. In addition, samples were sent to Dr. Bruce Jackson at Boston University for DNA analysis as part of the African-American Roots Project which attempts to link mtDNA from ancient and modern populations in the United States with ethnic groups in Africa. The DNA study confirmed the presence of African genetic markers among the initial samples sent early in the project. The forensic team determined that of the eight sets of remains, four were male (Burials 1, 2, 5, 12), one is female (Burial 6) and the rest were of indeterminate sex. Most were adults who died between the ages of 21 and 40, although one individual (Burial 3) may have lived a decade longer. One child between the ages of 7 and 12 at death (7) was buried above an adult male (12) in a stacked burial. The cultural practice of dental modification was noted in the teeth and mandibles of two individuals.

The rediscovery of the African Burial Ground in October 2003 brought together diverse parties –archaeologists, physical, forensic, and genetic scientists, African-Americans, neighbors, churches, city and state officials, engineers, contractors, and museum administrators – who worked together to successfully address a difficult task. Members of the African-American community were immediately involved in the process and were principal players in defining appropriate research questions and in deciding matters relating to the final deposition of the human remains. Many came to the site to bear witness, offer prayers, and serve as pall bearers as each burial was removed and transported to a temporary facility. Open communication among all parties allowed the effort to progress smoothly despite pressure-packed conditions.
The rediscovery of the burial ground has tremendous distinction as the only known African-American cemetery of its age that has been investigated through archaeology in all of New England. The City of Portsmouth has closed this portion of Chestnut Street and created the African Burying Ground Memorial Park, which opened in May 2015. The contemplative urban park features outdoor public art and a specially designed crypt in which the remains removed by archaeologists in 2003 were reinterred with great ceremony. For more information on the Portsmouth African Burial Ground Memorial please visit http://www.africanburyinggroundnh.org/